WALNUT CREEK — For Walnut Creek resident Andrea Kelly Smethurst, the pools at Heather Farm Park have been an important part of her family’s life.

That’s where her daughters first took swim lessons, where they learned to be lifeguards and where they gathered every summer for the All City swim meet, which hosts a collection of local swim clubs from around the area. Smethurst also swims there regularly for her own fitness routine.

So she, along with more than 5,700 other people, has signed an online petition urging the city to keep a 50-meter swimming pool in whatever plans are eventually approved for the overhaul of the decades-old swim facility.

“If the city downsizes to a pool half as big, I fear that other families won’t have access to the basic swim lessons that keep our children water-safe and the fitness that keeps me healthy,” Smethurst said. 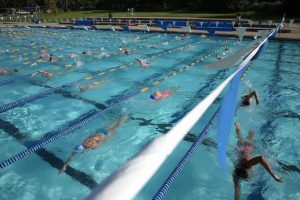 “I also worry that with half the pool space, we will only have half the space for everything that currently happens at the pool,” she added. “Will we have to cut the aquatic fitness class for adults with mobility issues in order to teach swim lessons for children? Or the free play area? Or the lanes for swim teams to practice?  And if we cut the lanes for teams to practice, what will the teens do instead?”

The pool overhaul is part of a multi-phase, multi-year effort to renovate a handful of city-owned facilities, including the swim complex at Heather Farm Park, the community buildings at Heather Farm Park and Civic Park, and the Shadelands Art Center.

There are two options for the pool renovation portion of the work that will eventually go to the city council for a vote. Both options entail demolishing the existing pools — including the big 50-meter one — a smaller recreational pool and a diving well.

Building the 25-meter pool could result in a reduction in programming at the swim center, which includes swim lessons, swim meets and fitness classes. That worries some, including Smethurst, vice president of the Walnut Creek Aquatics Foundation, a nonprofit formed to advocate for Walnut Creek’s swim facilities.

The foundation has agreed to raise $3 million to help cover the difference in cost between a 25-meter pool and a 50-meter one. City documents peg the construction costs for the smaller pool at between $5.7 million and $7 million and larger one at $9 million to $11 million.

Built in 1973, the pools at Heather Farm Park need to be updated to meet current safety and building codes. The aquatics foundation has also said that updating the complex could help bring in additional revenue by drawing more people to the facility.

Plans for updating the Heather Farm swim facility have been in the works since at least 2010, when the city assessed a plan to replace all three existing pools but put it on hold because of the cost, estimated at more than $22 million.

At the end of 2017, the city council directed staff to review programming and usage of the pools and the other buildings at the Shadelands Art Center, Civic Park and Heather Farm Park, starting what’s been dubbed the “Your Parks Your Future” project. Now, with input from an advisory committee and the arts and parks, recreation and open space commissions, the council will determine which projects need to be done first and how extensively each site will be renovated or rebuilt.

For more information and updates on the projects, visit http://www.walnut-creek.org/departments/arts-and-recreation/recreation-parks/your-parks-your-future

We're currently offline. Send us an email and we'll get back to you, asap.

Type and press Enter to search